Noticias blog>How much does a kilo of saffron cost?

Home > Noticias blog>How much does a kilo of saffron cost?

How much does a kilo of saffron cost?

How much is 1kg worth of saffron?

This is a very recurring question and somewhat complicated to answer as it depends on what purpose and who asks, I explain:

- How much is 1kg in bulk directly from the producer?

- How much is it worth producing 1kg of saffron?

¬Ý- How much is 1kg worth of saffron in a souk?

As you can see there are several ways to focus on the subject and many more that can be sure, we will try to respond to those indicated:

The retail or retail price that can be find in Spain of a good Spanish saffron can be between 8 and 10 ‚Ç¨ per gram, so the kilo would be between 8000 and 10000 ‚Ç¨ per kilo. As an account it is very good although it does not make much sense because nobody would buy 1kg of saffron in a shop at a stroke.

In other countries like France, Argentina, USA , etc. The best saffron can reach outrageous prices between 20 and 35 ‚Ç¨ /gr .

There is also Spanish saffron at a lower price, there are several categories and you can find saffron select between 4 and 5 ‚Ç¨ gram, this would be the saffron that is not new of the year and has lower quality than the last harvest.

- How much is 1kg of saffron directly from the producer?

Producers buy saffron n the marketers , in Spain the range that can be found in prices is very broad and depends directly on the prices of the imported saffron and how the harvest is each year.

In the last 10 years the highest price that has come to be paid was ‚Ç¨ 3500 /kg , this price is considered very high and was because at that time Iran suffered a commercial veto from Europe and the United States causing a greater demand for Spanish saffron.

The lowest price for which there is evidence has been ‚Ç¨ 1500 /kg , caused by the new opening of the market to Iran that flooded the commercial sector with saffron for several years (those of the commercial veto) at prices that broke the market reaching to be able to acquire them for 400 - 500 ‚Ç¨ /kg, this is a price that does not cover the production of the product itself but that served to give rise to the accumulated saffron and at the same time To recover the lost market share or even more to the Spanish production, a very serious commercial blow, not definitive since there is a commercial sector that continues betting on the superior quality.

The drop in prices in the wholesale sector was not reflected in the final price of the commercial lines because the intermediaries and the hypermarkets themselves maintained a high price providing brutal profit margins.

How much is it worth producing 1kg of saffron?

This is the most difficult question to answer as it is very difficult to calculate how much it costs to get 1kg of saffron.

The investment to have an azafranal must be amortized over the long term since only machinery and equipment (for have a large extension) can amount to ‚Ç¨ 50000 without counting the investment during the first 4 years in the bulb which is also one of the strongest and most important investments to establish a crop, apart from the cost of fertilizers, personnel for the tasks of collection, debris and toasting, of the mentioned investments there are some fixed with the same cost each year and other variables depending on whether the harvest is higher or lower each year.¬Ý

Taking into account the data provided by several producers with many years of experience in the sector, we can assess that the estimated cost to produce 1kg of saffron is 1700 - 1800 ‚Ç¨ /Kg .

After having the saffron already properly toasted the commercial ones have to assume or other expenses before being able to pack the product as it is the cleaning and conditioning of the spice to meet the quality standard, this is a manual process and with a high cost that increases by 30% the purchase price, to this we should add the process of packaging, labeling and packaging, amortization of passive and current assets of the company itself so 1gr can have a cost of 3800 - 4000 ‚Ç¨ /kg.

With the margin of the commercial, distributor and the point of sale the prices can reach those indicated above.

How much is 1kg worth of saffron in traditional third-country sauces? 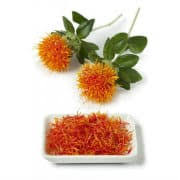 How many times have we heard from friends who have traveled to countries in the Middle East that have brought saffron very cheaply? , but really what is it that has been brought on the trip back? Normally it is safflower which is a product that also gives some color but has nothing to do with saffron, there are references that sell "Saffron" from ‚Ç¨ 20 /kg . In this type of countries the legislation regarding the trade of saffron is a chimera and the control is null, for this reason they take advantage of the value of the true saffron to give cat hares in the spice markets that have more fame in the world, the souks.