The black truffle (Tuber melanosporum), is highly appreciated in gastronomy for its aroma and is of great economic value. It is a fungus that is found under the ground and that has a dark, black exterior appearance, with a warty surface. Today this mushroom can be grown in so-called truffles.

€13.60
Net weight: 90gr Cooked over low heat respecting the times, and with several slices of black truffle. High quality product. Ideal for any aperitif, lunch, snack, or any time.

Truffle in its juice Tuber Melanosporum

Truffle in its tuber aestivum juice

Desde €13.00 €14.45
Fresh truffle Tuber Melanosporum that comes from the fields of Belotruf in Monreal del Campo Formats from 20g to 1kg, can be seen in the "Net Weights" drop-down. We ship this haute cuisine diamond from December to March, collected the same day the order is received and without breaking the cold chain, it is sent brushed since Belotruf recommends that it...

The black truffle (Tuber melanosporum), is highly appreciated in gastronomy for its aroma and is of great economic value. It is a fungus that is found under the ground and that has a dark, black exterior appearance, with a warty surface. Today this mushroom can be grown in so-called truffles.

Its natural habitat is forests and mountains, but in Spain there is a large area of ​​controlled cultivation, in fact, Spain is considered the main producer worldwide, with provinces as prominent as Teruel. In it, the I International Congress of Trufficulture was held in March 2013. Teruel truffle buy in Aragon Gourmet, buying teruel black truffle is a wise move to raise the gastronomic level of your stews and recipes.

It lives underground, in symbiosis with the roots of holm oaks. It reproduces in the spring, then appearing as small balls, which then swell and mature in the summer and fall, reaching the size of a golf ball. It measures between 3 and 7 cm - sometimes 10 cm are collected - and weighs between 20 and 200 grams, although exceptionally they can exceed 600 g. The truffle emits allelopathic substances that prevent the growth of the grass around it, and that is sometimes a key to finding them. 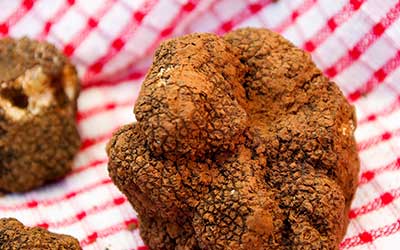 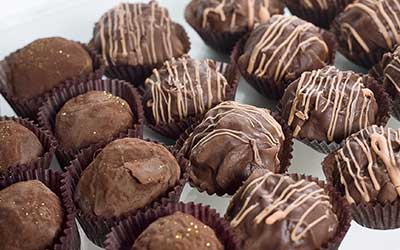 Its appearance is reminiscent of a potato if it is born in a 'loose' soil and of irregular shape, with shallow “warts” if it is born in a stony soil, and may have capricious shapes. The color of its flesh is black-purplish, with white veins, when it has reached its full maturity. As its name suggests, maturity comes in winter.

It is collected in the winter, using dogs specially trained in their smell. The best dates are January, although the harvesting period begins in December until March.

The summer truffle (Tuber Aestivium) is little known due, among other things, to the fact that its economic value is lower than that of the black truffle, however it is widely distributed throughout the Spanish geography and although its value is lower it is nothing negligible.

The appearance of the summer truffle is very similar to that of the black truffle, although the warts of the peridium are more pronounced. The inside of the truffle has lighter tones.

It also has the advantage of being able to develop where the black truffle does not, by tolerating broader ranges in the environmental conditions in which it lives.

Buying black truffle on our website is very simple, you can find it in different formats and of the best quality